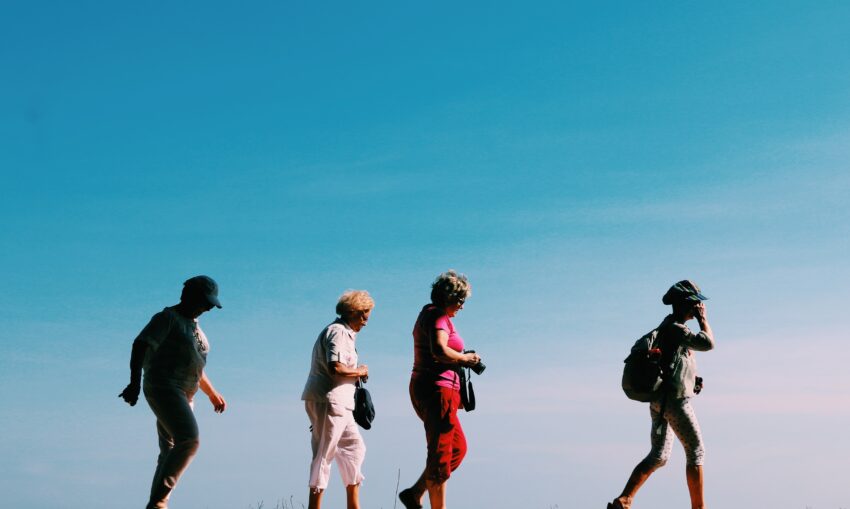 As we transition between life stages such as adolescence, young adulthood, emerging adulthood, middle age, and later life, our friendships change in many ways.

Our relationships begin to deepen in adolescence as we negotiate the confusion of puberty. Then, in early adulthood, many people get to explore their identities and diversify their friendship circle. Later, our lives stabilize and we begin to rely more on friendships with a romantic partner and continue to nurture the friendships that have lasted. Let’s now learn more about the characteristics of friendships across the life span.

We typically make our first voluntary close social relationships during adolescence as cognitive and emotional skills develop. At this time, our friendships are usually with others of the same age/grade in school, gender, and race, and friends typically have similar attitudes about academics and similar values. These early friendships allow us to test our interpersonal skills, which affects the relationships we will have later in life. For example, emotional processing, empathy, self-disclosure, and conflict become features of adolescent friendships in new ways and must be managed.

Adolescents begin to see friends rather than parents as providers of social support, as friends help negotiate the various emotional problems often experienced for the first time.

This new dependence on friendships can also create problems. For example, as adolescents progress through puberty and forward on their identity search, they may experience some jealousy and possessiveness in their friendships as they attempt to balance the tensions between their dependence on and independence from friends. Additionally, as adolescents articulate their identities, they look for acceptance and validation of self in their friends, especially given the increase in self-consciousness experienced by most adolescents.

Those who do not form satisfying relationships during this time may miss out on opportunities for developing communication competence, leading to lower performance at work or school and higher rates of depression. The transition to college marks a move from adolescence to early adulthood and opens new opportunities for friendship and challenges in dealing with the separation from hometown friends.

Early adulthood is from around eighteen to twenty-nine years of age. Although not every person in this age group goes to college, most of the research on early adult friendships focuses on college students. Those who have the opportunity to head to college will likely find a canvas for exploration and experimentation with various life and relational choices relatively free from the emotional, time, and financial constraints of starting their own family that may come later in life.

As we transition to early adulthood, we’re still formulating our understanding of relational processes, but people report that their friendships are more intimate than the ones they had in adolescence. During this time, friends provide important feedback on self-concept, careers, romantic and/or sexual relationships, and civic, social, political, and extracurricular activities.

Adult friendships span a larger period of time than the previous life stages, as adulthood encompasses the period from thirty to sixty-five years old. The exploration that occurs for most middle-class people in early adulthood gives way to less opportunity for friendships in adulthood, as many in this period settle into careers, nourish long-term relationships, and have children of their own. These new aspects of life bring more time constraints and interpersonal and task obligations, and with these obligations comes an increased desire for stability and continuity.

Adult friendships tend to occur between people who are similar in terms of career position, race, age, partner status, class, and education level. This is partly due to the narrowed social networks people join as they become more educated and attain higher career positions. Therefore, finding friends through religious affiliation, neighborhood, work, or civic engagement is likely to result in similarity between friends.

Even as social networks narrow, adults are also more likely than young adults to rely on their friends to help them process thoughts and emotions related to their partnerships or other interpersonal relationships. For example, a person may rely on a romantic partner to help process through work relationships and close coworkers to help process through family relationships. Work life and home life become connected in important ways, as career (money making) intersects with and supports the desires for stability (home making). Since home and career are primary focuses, socializing outside of those areas may be limited to interactions with family (parents, siblings, and in-laws) if they are geographically close.

In situations where family isn’t close by, adults’ close or best friends may adopt kinship roles. Spouses or partners are expected to be friends; it is often expressed that the best partner is one who can also serve as best friend, and having a partner as a best friend can be convenient if time outside the home is limited by parental responsibilities.

There is not much research on friendships in late middle age (ages fifty to sixty-five), but it has been noted that relationships with partners may become even more important during this time, as parenting responsibilities diminish with grown children and careers and finances stabilize. Partners who have successfully navigated their middle age may feel a bonding sense of accomplishment with each other and with any close friends with whom they shared these experiences.

Friendships in later-life adulthood, which begins in one’s sixties, are often remnants of previous friends and friendship patterns. Those who have typically had a gregarious social life will continue to associate with friends if physically and mentally able, and those who relied primarily on a partner, family, or limited close friends will have more limited, but perhaps equally rewarding, interactions.

Given that geographic relocation is common in early adulthood, these friends may be physically distant, but if investment in occasional contact or visits preserved the friendship, these friends are likely able to pick up where they left off. However, biological aging and the social stereotypes and stigma associated with later life and aging begin to affect communication patterns.

Obviously, our physical and mental abilities affect our socializing and activities and vary widely from person to person and age to age. Mobility may be limited due to declining health, and retiring limits the social interactions one had at work and work-related events. People may continue to work and lead physically and socially active lives decades past the marker of later life, which occurs around age sixty-five. Regardless of when these changes begin, it is common and normal for our opportunities to interact with wide friendship circles to diminish as our abilities decline.

Early later life may be marked by a transition to partial or full retirement if a person is socioeconomically privileged enough to do so. For some, retirement is a time to settle into a quiet routine in the same geographic place, perhaps becoming even more involved in hobbies and civic organizations, which may increase social interaction and the potential for friendships. Others may move to a more desirable place or climate and go through the process of starting over with new friends. For health or personal reasons, some in later life live in assisted-living facilities. Later-life adults in these facilities may make friends based primarily on proximity, just as many college students in early adulthood do in the similarly age-segregated environment of a residence hall.

Friendships in later life provide emotional support that is often only applicable during this life stage. For example, given the general stigma against aging and illness, friends may be able to shield each other from negative judgments from others and help each other maintain a positive self-concept. Friends can also be instrumental in providing support after the death of a partner.

Men, especially, may need this type of support, as men are more likely than women to consider their spouse their sole confidante, which means the death of the wife may end a later-life man’s most important friendship. Women who lose a partner also go through considerable life changes, and in general more women are left single after the death of a spouse than men due to men’s shorter life span and the tendency for men to be a few years older than their wives. Given this fact, it is not surprising that widows in particular may turn to other single women for support. Overall, providing support in later life is important given the likelihood of declining health. In the case of declining health, some may turn to family instead of friends for support to avoid overburdening friends with requests for assistance. However, turning to a friend for support is not completely burdensome, as research shows that feeling needed helps older people maintain a positive well-being.

Adapted from Communication in the Real World

Photo by sk on Unsplash