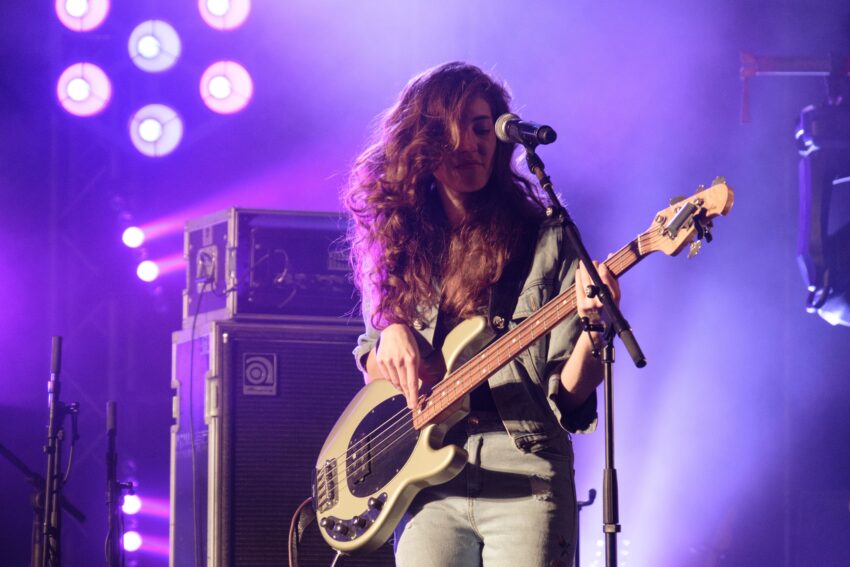 If you’re on the lookout for new music, and want to give your support to female artists, now (and always) is the perfect time to do so!

For decades, all-female groups have made an impact on the world in general, and music in particular. The article, Leaders of the Pack: A History of Girl Groups, takes a look at female musicians as far back as the 1940s. “It’s a long journey from The Andrews Sisters to Little Mix,” writes the author, “but the route is surprisingly direct. For each group mentioned here, there are dozens more, each with something to say. Generations of girls admire them — teenage boys do too. They deliver a different voice to pop: an emotional expressiveness, often surprisingly direct, that male acts cannot — and cannot even hope — to deliver. If that’s the real meaning of girl power, more power to them.”

We’ve compiled this list of all-female bands and girl groups across genres to give you the perfect mix of pop, punk, and everything in between.

Nasty Cherry is an up-and-coming pop rock girl-band under Charli XCX’s record label Vroom Vroom Recordings. Between lead singer Gabbriette Bechtel’s sultry voice, the band’s punk-pop sound, and Charli’s vision inspired by iconic girl gangs like Josie and the Pussycats and The Craft, Nasty Cherry has a unique, atmospheric sound that you have to try. Check out their first single “Win” here.

Girlpool, made up of best friends Harmony Tividad and Cleo Tucker, have such a beautiful lo-fi indie rock sound. They both play bass and guitar, and often switch between them, as well as singing in unison and harmony. Their music is all about the experience of being a young woman, and their friendship shines through it. You can listen to title track “Minute in Your Mind” from their new album here.

Sleater-Kinney is not only one of the most influential and important all-female bands, but one of the essential rock groups of the early 2000’s. They’re known for their feminist ideals, and were influenced heavily by the riot grrrl movement. They blur the lines between the personal and political, and don’t care if their sound is polarizing. You can listen to their song “Can I Go On” from their new album ‘The Center Won’t Hold’ here.

This Russian feminist group was formed due to rage over misogynistic legislation placing restrictions on legal abortions, with riot grrrl influences and a direct focus on “the repression of authoritarian regimes that created idealized ideas of sexism, sex and family life.” In 2012, two members, Maria Alyokhina and Nadezhda Tolokonnikova, were arrested for hooliganism by Russian authorities.

They were freed in 2013 under a general amnesty, and many artists internationally have shown their support for the group and have expressed interest in performing with them since, but one member is quoted saying they “refuse to participate in legal performances as part of a capitalist system.” Most recently, three members as well as one man were sentenced to 15 days imprisonment after performing a football pitch invasion during the 2018 FIFA World Cup match between France and Croatia. You can listen to their 2017 single “Police State” here.

K-Pop group Blackpink debuted in 2016, and is one of the highest-charting female K-pop acts on Billboard’s Hot 100. They were also the first female K-pop group to perform at Coachella in 2019, as well as the first to be featuredon the cover of Billboard magazine. Their sound is a blend of pop, EDM, and hip hop, and you can listen to their most popular single “Ddu-Du Ddu-Du” here.

British pop group Little Mix were the first to win The X Factor UK in 2011, and their harmonies, catchy hits, and loveable personalities are what make them one of the most popular girl groups at the moment. They released their debut album DNA in 2012, being the first group from the UK’s debut album to reach the US top five since The Pussycat Dolls, as well as the top 10 in several other countries. They’ve released 4 more albums since then, and announced a sixth album was in the works along with a new single in May 2019 titled “Bounce Back,” which you can listen to here.

Aly & AJ are a sister pop duo that first debuted in 2004 with Into the Rush. You might know them from their time on Disney, acting in multiple television shows and Disney Channel original movies, including Cow Belles, where the sisters star as two once-spoiled sisters who are put to work at the dairy by their father. If you haven’t seen it, it’s a ridiculous yet fun television movie, and you definitely should.

After departing from Hollywood Records in 2014 and announcing that their EP under the name 78violet would probably not be released, they made a comeback in December of 2015 back under the name Aly & AJ. Most recently, they released an EP, Sanctuary, this past May, with a danceable synth-pop sound you won’t be able to get out of your head. You can listen to the title track, “Sanctuary,” here.

Otoboke Beaver, named after a love hotel in Osaka, is a female punk rock band from Japan. Their style is fast-paced, aggressive punk rock, with a main lyrical focus on love from lead singer Accorinrin’s experiences. They’ve been together since 2009, and most recently released their album “Iketoma Hits” in 2019. They’re influenced by “western riot grrrl attitudes,” bands like Shonen Knife, Afrirampo, as well as electronica and classic music. You can listen to their song “Don’t Light My Fire” here.

Photo by Anton Mislawsky on Unsplash