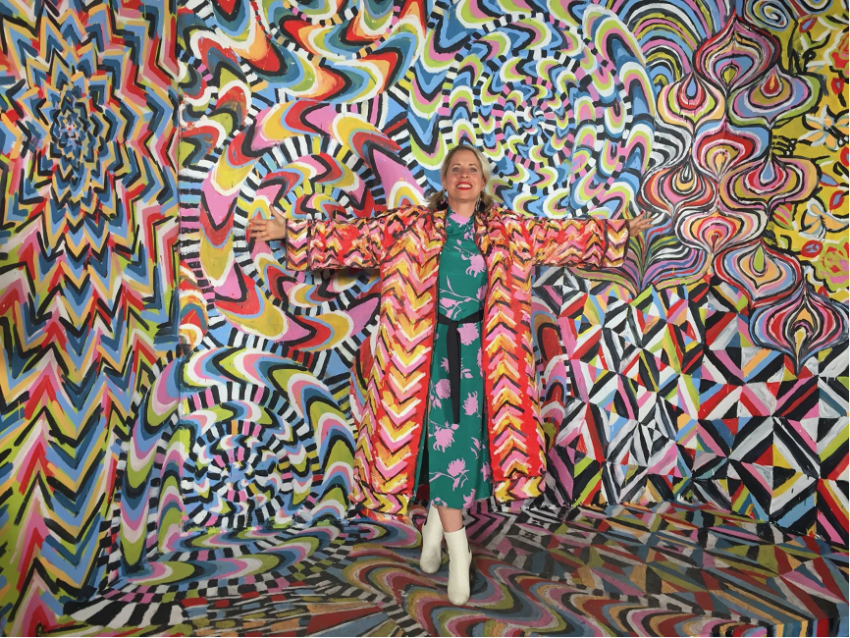 Project BFF sat down with Emmy-nominated filmmaker Tiffany Shlain to talk about the friendships in her life.

Project BFF: Tell us a memorable experience with a friend when you were younger. Why has that always stuck with you?

Tiffany: I went to a theater arts camp when I was 10 and met a girl who became my instant best friend. We lived several hours away from each other, but communicated often with letters and phone calls. When we were 15 she went to live on a boat for a year with her parents and invited me to join her in Greece. When I asked my dad if I could go he said “No way am I paying for that!” So I saved up for a whole year working at a one-hour photo shop.

It felt so exotic and exciting, going abroad for the first time on a trip I paid for myself. I still remember the taste of independence, listening to Sade on my Walkman as I walked up to the Acropolis and just feeling so cool. We danced on warm nights in Greek discos and rented mopeds to speed through the ruins.

We’re still friends. In fact, when my book came out last fall she attended the book party in LA. We went to UC Berkeley together, and we tried to make a feature film together. The film failed. The friendship didn’t. We went to the Cannes Film Festival to raise money with the other female members of the cast and crew, all 6 of us crammed into a rented studio apartment. I remember being at a party there, 22 years old, and some guy asked, “Are you two actresses, and we responded with young feminist pleasure “No, I’m the director, and she’s the producer.” We went through a lot together in those formative years, and now she’s a very successful home designer. She’s always had great style, and I love seeing how she’s manifested that into a career.

Project BFF: Social media was touted as a way to keep us connected. What is the impact you see that it’s had on friend relationships?

Tiffany: My answer would have been very different before the pandemic. Before, I was really worried about what a distorted version people presented of their lives on social. I stopped following a lot of people who just presented this perfect version of everything, even though I knew they were going through a hard time. It just felt disingenuous and difficult to reconcile what they were projecting versus what I knew what was going on.

However, during the pandemic, I’ve been really grateful for social media because it has served as a lifetime to information, humor, and connection. People are being more honest. Some things people have shared on social media made my laugh so hard I’ve cried; others have wrecked me. We’ve been able to share important information about Covid and do lots to inspire each other to keep going in the face of it all. Because of the pandemic, I have renewed hope for what social media could be, though I still worry  about its intrinsically addictive nature.

I really curate who I follow. About five years ago, I made a really conscious effort on Facebook to only follow people who post interesting things, beyond just their lives. I like people who post about ideas and posts that inspire or challenge me. I think everyone should be very mindful—whoever you follow online is going be shaping your brain.

Facebook has changed how we think about the word “friend.” Who are your core friends are that you can really count on, who know you and are there for you? It shouldn’t be a long list.

Project BFF: Do you feel like you have a best friend? What makes you say that?

And then I have girlfriends I like to talk about filmmaking or writing with. Some I hang out to walk our dogs and talk about life. I’m so grateful that my cup is very full with friends that really inspire or push me, which I think is really important too.

Project BFF: How do your friends feel about your mission/career? How do they support you and your work?

Tiffany: Different friends show up in different ways. There are some friends that would never miss one of my film premieres or a book launch. There are other friends that support me in other ways, and actually as I’ve gotten older, I’ve come to understand the value of all of that. Because I think that was a part of me that thought, Oh, you have to show up, that’s a really important part about being a friend. But I have a lot of events and I don’t expect my friends to come to everything. Because I know they might not be at that premiere, but they were emotional support when I was nervous about that premiere or something else. They all show up in different ways.

Project BFF: Have you ever struggled with friendships?

That was a long time ago. Now, during the pandemic, it’s really clear to me who I want to spend time talking to or seeing. For a lot of people now, our lives got smaller, so you have to be more thoughtful about who you share your space and time with. And I’m also trying to really stay positive, which can be very difficult. In this pandemic, there are different ways you could look about what’s happening, and different ways to react to it, and I think that’s been really interesting. It’s like a roller coaster—the corona-coaster. Who do I want to be on this corona-coaster with?

Project BFF: If you could be friends with a historical or so no longer living or fictional women, who would that be and why?

Tiffany: There’s someone I’ve always looked up to, who was a reveal maverick in the independent film world, and is often considered the mother of independent cinema: Maya Deren. She was this incredible avant-garde filmmaker. She was an Ukrainain-born American filmmaker who combined dance, psychology and poetry into films. She moved to Manhattan and would show her very experimental films in her apartment in Greenwich Village. She basically started the whole underground film movement, when before, it was just Hollywood films. I would have loved to hang out with her.

Project BFF: What advice would you give your 12 year old self about making friends throughout your life?

Tiffany: I have an 11-year-old daughter. I was telling her about this interview, and she said “I know what advice I would give her: That you don’t have to have just one best friend; you can have many different friends that you do different things with.” I’ve been teaching her that, so it was really exciting to hear her tell me that’s what she’d advise.

My best friends now aren’t the same best friends as I was 12. I’m still good friends with many of my best friends from high school and college, but a lot of my closest friends now are ones I made as an adult after I was married. I think that your whole life, everyone plays such an important role in shaping your thoughts and shaping who you are, but it’s okay to evolve and have different friends in your life. You will kind of land on some people that I would call your forever friends. Even in the last three or four years, I’ve made three new best friends, and that was very exciting at this point in life, to make a great new friend.

At every stage in life, hopefully you meet some people that really are inspiring and that you connect with. And I think it’s good to have best friends of different ages. I’ve learned so much from older people and younger people, and I think all of our friends can be mentors in some way. As a 12-year-old, it wouldn’t have occurred to me that you could be best friends with somebody who’s a different age. Best friends come in many different forms. Now that I, like many, got a puppy during the pandemic, I am understanding how a dog can be a person’s best friend too.

Tiffany Shlain is an Emmy-nominated filmmaker, founder of the Webby Awards, author of national bestselling book 24/6: Giving up Screens One Day a Week to Get More Time, Creativity, and Connection, winner of the Marshall McLuhan Outstanding Book Award. She hosts a monthly #ZoomChallahBake and writes a newsletter called Breakfast @ Tiffany’s. For information on her book, baking, films, and her newsletter, visit tiffanyshlain.com and follow Tiffany on Twitter, Facebook, and Instagram.

Support us on Patreon